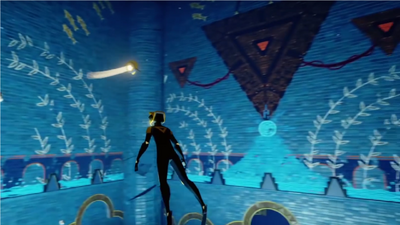 The great harvester is said to have been built by the ancient fallen civilization that left behind the temples that are explored in-game. It is said that the ancient civilization used containment jars to harvest the blue energy that is very common within the game. This blue energy has also been called "the power of the ocean." The Great harvester was said to automate the collecting process of blue energy, due to the fact that it was designed to absorb the entirety of the energy in the ocean. According to the lore of the game, the Great Harvester absorbed excessive amounts of the ocean's energy and surpassed its creators. It then developed it's own intelligence and turned against its masters.

The Great Harvester's only function is not just to harvest energy, it also produces Mines and the small Drones that aid the diver at the beginning and middle of the game. Within the production lines it creates the bodies of the machines and then fits them with a power core conceived of blue energy. The second module encountered within the game is the security blockade. The security blockade is a large blockade of Mines that guard the Central Core. The third and final module encountered is the Central Core. The Central Core is the main hivemind of the antagonist faction and controls the great harvester. In the mid-end of the game the central core is encountered and proceeds to deliver a large stun blast that disables the player and kills the player's shark ally. At the end of the game the central core is destroyed, releasing the ocean's energy and allowing life to begin to return to the once desolate area surrounding the Great Harvester.